:ast post I told you all about Zen’s labor and delivery and that whopper of a last puppy.  That happened about a week ago, so let’s fast forward and talk about current topics a bit.

Ever since the pups were born last week, mornings bring the same routine, and it’s come to be a routine I welcome.  First of all, I’m still sharing digs with Zen and the pups, so hey, who needs an alarm clock?  In fact, who needs sleep?  Little Mama Needlenose and the Chorus of 9 start my day with a tag-team – a cold nose poke, accompanied by the junior hound ensemble singing me the “song of their people.”

But sometimes, she let’s them sleep in…

First up? Potty breaks!  Madame Zen drinks a lot of water, and while she uses up most of it in milk production, she still does need to get outside.  While she’s out, I gather up the little guys into a basket so they are safe and out of the way while I clean up their box, police their bedding into the laundry and generally tidy up.  I’ve been changing their bedding once or twice a day, depending on how nasty it gets. I don’t know about the rest of you, but sleeping in the same room as the whelping box is HIGHLY motivating to keep it smelling clean and fresh!

Oh, and here’s a quick product plug.  No, I’m not getting compensated to endorse this stuff, but I’m so happy to have discovered it, I can’t wait to get back home and see if they carry it in Nebraska. Meyer’s Clean Day Multi Surface Everyday Cleaner .  Love it. I’m sensitive to chlorine, it makes me sneeze my brains out, so bleach is problematic for me. It’s nice to be able to have clean surfaces without the chemical smells.

When Zen comes in, I crate her a bit now, to keep her out from underfoot for a few minutes.  She likes to poke that long nose into my business… especially when it’s puppy business.  For the first few days, crating her for even an instant was HIGH DRAMA… all the screaming and carrying on!  But, now that the pups are about a week old, she’s a lot more mellow about it.  In fact, she might even be enjoying the break, some cold water, and breakfast in bed.  The last couple days, she’s just been laying there watching me, silent as a sphinx.  She was a little anxious as a new mother, at first, and I’m sure I’m at least partially to blame.  After all, it was my first time at this, as well.  But we’re in a good place now.

Rita likes to get everyone weighed and evaluated around the same time every day, give or take, and that’s a tradition I’m trying to keep.  Zen’s making it easy – I can almost set my watch by her.  As I take each pup from the basket, it gives me the chance to interact with them one-on one, look them over, weigh them to see how much they’ve gained, and see if they’re vigorous and feeling good. 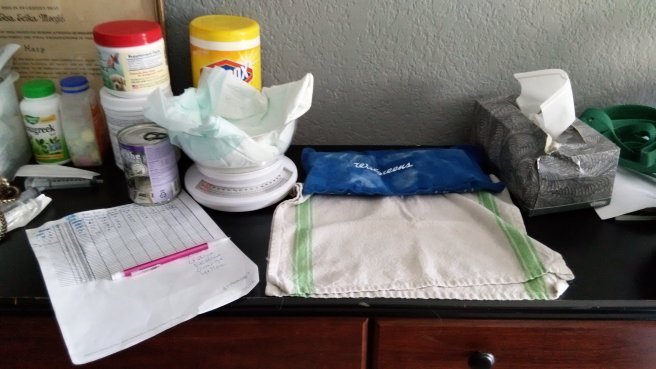 Also, I began the Avidog Early Neurological Stimulation Exercises, to get them used to being handled in many different ways.  Handle their feet, get them to accept restraint in several different positions, a 5 second exposure to a cold surface, etc.  Then I take notes on their daily disposition and how they respond to these stimuli.

This helps each puppy achieve their full potential and grow into the most successful and confident canine competitor and companion they can possibly be. Also, over the weeks of doing the neural stimulation exercises, you can get a pretty good feel for who each pup is, as an individual… and what kind of home might be the best match for them in the future.

This may sound like a LOT of work to some people.  It’s way too much work for someone wanting to sell cheap purebred puppies, but that’s a topic for another time.  Maybe tomorrow?

One thought on “The Morning Ritual: Early Neural Stimulation and Checkups”